The Church is a Field Hospital for Sinners.

- Mother of Our Lord

Our Lady is most often pictured pointing to her Son 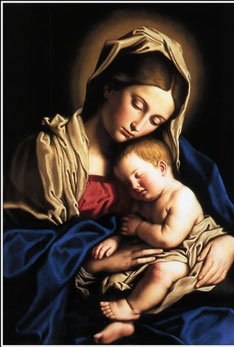 The Virgin Mary is perhaps the most widely recognized and venerated saint in all of Christian tradition – and rightly so. As the humble handmaid of the Lord who became the mother of Jesus, the Virgin Mary is a model and an intercessor for all God’s people.

Tradition tells us that Mary’s parents were named Joachim and Anne, and that she was born in Jerusalem. She grew up in Nazareth, and at a young age was visited by the archangel Gabriel, who announced to her that she would become the Mother of Jesus. She was puzzled by this declaration, stating that although she was betrothed to Joseph, they were not living together, and she had therefore had “no relations with a man.” (Luke 1:34) The archangel Gabriel explained to her that she would become the Mother of God through the power of the Holy Spirit. (Luke 1:38) Mary’s statement, known as the “Fiat,” was her “yes” to God to allow Him to use her according to His will.

Mary had a cousin named Elizabeth who had been unable to conceive a child with her husband, John. God intervened and Elizabeth, even in her old age, became pregnant. Mary, while in her sixth month of her own pregnancy, went to visit Elizabeth. Elizabeth announced that the baby in her womb leapt for joy upon hearing Mary’s greeting, and Mary proclaimed her “Magnificat.” (Luke 1:46-55)

Mary and her husband, Joseph, traveled Bethlehem to register for the census, since that is where his family was from. While on their journey, the time came for Mary to deliver. They were unable to find an inn to stay in, and Mary gave birth to the child Jesus in a stable. They were visited by angels, shepherds, and wise men who brought gifts for the newborn King. Mary and Joseph later returned to Nazareth, where the Holy Family lived and grew in holiness together.

The Virgin Mary was often present during the time of Jesus’ public ministry. His first public miracle, in which he changed the water to wine at a wedding in Cana, was at the request of Mary. This story is often referenced as a reason why many people offer prayers of intercession through Mary to God – for Jesus listened to his mother’s request, understood the needs of the bride and groom at the wedding, and responded.

Mary was with Jesus during his Passion and Death, meeting him along His way to Calvary, and standing at the foot of the Cross with St. John. It was at this time that Jesus looked at Mary and said “Woman, behold your son.” Then he looked at St. John and said “Behold your Mother.” (John 19:26-27) In this moment Jesus gave his Mother to not only St. John, but to all people.

At the end of her life, the Virgin Mary was assumed body and soul into heaven, where she was crowned Queen of Heaven and Earth. Throughout the ages, the Blessed Mother has appeared to many with messages to inspire, comfort, and encourage. Some well-known Marian apparitions are:  Our Lady of Walsingham,  Our Lady of Lourdes, and Our Lady of Fatima (among many others). The Virgin Mary continues to be a Mother to all the world by offering her intercession and prayers for the people of God.

The Virgin Mary is honored on many days throughout the Church year, each commemorating a special moment in her life.

The most principally celebrated days are:

1st of Jan. The Solemnity of Mary, Mother of God

25th Mar. The Feast of the Annunciation

15th Aug, The Assumption of Mary into Heaven

8th Sept. The Nativity of the Blessed Virgin Mary

8th Dec. The Feast of the Immaculate Conception

St. Matthew is often pictured with an Angel

inspiring him as he writes his gospel. 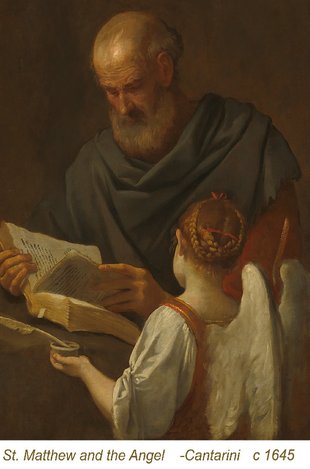 A further biographical detail emerges from the Gospels: in the passage that immediately precedes the account of the call, a miracle that Jesus worked at Capernaum is mentioned and the proximity to the Sea of Galilee. It is possible to deduce from this that Matthew exercised the function of tax collector at Capernaum, which was exactly located “by the sea”, where Jesus was a permanent guest at Peter’s house.

On the basis of these simple observations that result from the Gospel, we can advance a pair of thoughts. The first is that Jesus welcomes into the group of his close friends a man who, according to the concepts in vogue in Israel at that time, was regarded as a public sinner. Matthew, in fact, not only handled money deemed impure because of its provenance from people foreign to the People of God, but he also collaborated with an foreign and despicably greedy authority whose tributes moreover, could be arbitrarily determined. This is why the Gospels several times link “tax collectors and sinners” , as well as “tax collectors and prostitutes”. Furthermore, they see publicans as an example of miserliness and mention one of them, Zacchaeus, as “a chief tax collector, and rich”, whereas popular opinion associated them with “extortioners, the unjust, adulterers”.

Based on these references: Jesus does not exclude anyone from his friendship. Indeed, precisely while he is at table in the home of Matthew-Levi, in response to those who expressed shock at the fact that he associated with people who had so little to recommend them, he made the important statement: “Those who are well have no need of a physician, but those who are sick; I came not to call the righteous, but sinners”. The good news of the Gospel consists precisely in this: offering God’s grace to the sinner!

Elsewhere, with the famous words of the Pharisee and the publican who went up to the Temple to pray, Jesus actually indicates an anonymous tax collector as an appreciated example of humble trust in divine mercy: while the Pharisee is boasting of his own moral perfection, the “tax collector… would not even lift up his eyes to heaven, but beat his breast, saying, “God, be merciful to me a sinner!'”. And Jesus comments: “I tell you, this man went down to his house justified rather than the other; for every one who exalts himself will be humbled, but he who humbles himself will be exalted”.

Thus, in the figure of Matthew, the Gospels present to us a true and proper paradox: those who seem to be the farthest from holiness can even become a model of the acceptance of God’s mercy and offer a glimpse of its marvellous effects in their own lives. St John Chrysostom makes an important point in this regard: he notes that only in the account of certain calls is the work of those concerned mentioned. Peter, Andrew, James and John are called while they are fishing, while Matthew, while he is collecting tithes. These are unimportant jobs, Chrysostom comments, “because there is nothing more despicable than the tax collector, and nothing more common than fishing”.  Jesus’ call, therefore, also reaches people of a low social class while they go about their ordinary work.

Another reflection prompted by the Gospel narrative is that Matthew responds instantly to Jesus’ call: “he rose and followed him”. The brevity of the sentence clearly highlights Matthew’s readiness in responding to the call. For him it meant leaving everything, especially what guaranteed him a reliable source of income, even if it was often unfair and dishonourable. Evidently, Matthew understood that familiarity with Jesus did not permit him to pursue activities of which God disapproved.

The application to the present day is easy to see: it is not permissible today either to be attached to things that are incompatible with the following of Jesus, as is the case with riches dishonestly achieved. Jesus once said, mincing no words: “If you would be perfect, go, sell what you possess and give to the poor, and you will have treasure in heaven; and come, follow me”. This is exactly what Matthew did: he rose and followed him! In this “he rose”, it is legitimate to read detachment from a sinful situation and at the same time, a conscious attachment to a new, upright life in communion with Jesus.

Lastly, let us remember that the tradition of the ancient Church agrees in attributing to Matthew the First Gospel. This had already begun with Bishop Papias of Hierapolis in Frisia, in about the year 130. He writes: “Matthew set down the words (of the Lord) in the Hebrew tongue and everyone interpreted them as best he could”.

Eusebius, the historian, adds this piece of information: “When Matthew, who had first preached among the Jews, decided also to reach out to other peoples, he wrote down the Gospel he preached in his mother tongue; thus, he sought to put in writing, for those whom he was leaving, what they would be losing with his departure”.

(At the time of the persecution of Herod Agrippa I in 42 AD, Matthew left the country and traveled to Cypress and North Africa. He was put to death at Naddabar in Ethiopia with a halberd, a spear fitted with an axe-head, as he was saying Mass. The year of his death year is unknown.)

The Gospel of Matthew written in Hebrew or Aramaic is no longer exists, but in the Greek Gospel that we possess we still continue to hear, in a certain way, the persuasive voice of the publican Matthew, who, having become an Apostle, continues to proclaim God’s saving mercy to us. And let us listen to St Matthew’s message, meditating upon it ever anew also to learn to stand up and follow Jesus with determination.